So...I'm thinking it's probably time for an update. You could safely say the last month has gone rather smoothly. We had his central line removed before the end of the year, which has given us back a great deal of freedom. He's also successfully navigated through two follow-up visits and managed the traditional blood draws like a champ! (I was really nervous. One can become very dependent on the central line.) He even insisted on sitting in the chair all by himself while the nurse drew his blood. My baby is growing up! Adam also completed his steroid regimen before the end of the year and now his chubby cheeks are disappearing. Not necessarily a bad thing. Actually, it's a good thing. We just miss kissing those adorable "cheekies".

Now we are currently tapering Adam's Cyclosporin (anti-rejection medication) and look forward to finishing that by March! It's done a great job doing what it's supposed to do, but to be honest, I will not miss that stuff. With the completion of the Cyclosporin, our opportunities to re-engage in the outside world open way up and hopefully by Summer, we can feel like we are back in the swing of things. 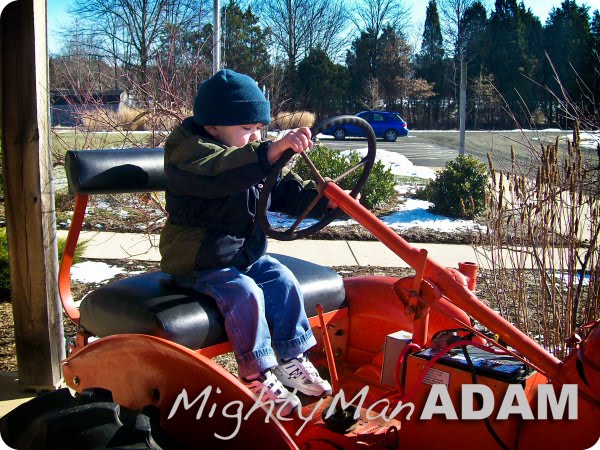 One more noteworthy event I just have to mention is that Adam came down with a sinus infection and managed to deal with all by himself!! Even his doctors weren't worried. I know it sounds really silly, but I was so stinkin' excited to see Adam could get sick and not have a fever or all the other unpleasantness that he usually would experience. And to add the very sweet cherry on top, we didn't have to go to the hospital. I honestly think that this has been the first time this has happened. Woo Hoo for a working immune system! 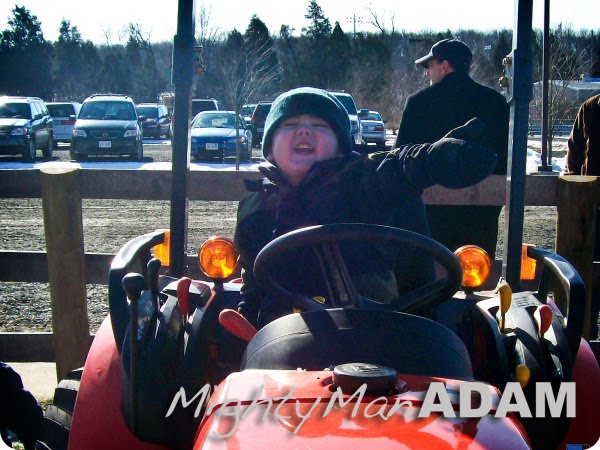 Dad took Adam to Tractorpolooza at Claude Moore Park.
Adam was in heaven with all that farm equipment!
Posted by Janna

You guys have been in our thoughts this week. Earlier in the week, the school nurse called to inform me that Will, Emma and Cole have lice. It's such a pain to get rid of. You have to wash everyone's bedding every day and vaccuum the whole house every day and pick the nits out and buy really expensive lice killing shampoo. Then last night when all my kids starting throwing up within ten minutes of each other, I muttered, "How can this week get any worse?"

Will looked at me and said, "Someone could get cancer?" All night when I heard another family member retching, I thought of you guys and everything you've had to deal with. You're like the pioneers to me. Whenver I'm outside working in the freezing cold, I think-"This is nothing. The pioneers had to deal with much worse." Now, when something bad happens we think of how brave your family has been and all you have been through.

Thanks for teaching us so much. We are excited for every little success Adam has. Love you guys,
The Autens

Finally, my browser is allowing me to see the pics I've missed. They're great! I am so happy to see Adam being his energetic self again. I hope to visit your family when the time is right. Thanks for updating the site.

So glad to hear everything is going so smoothly. No news is good news, I guess!